Applications are now open for the Roman Society's 2017 Museum Internship Bursary Scheme. There are up to eight bursaries of £250 available, which are to be put towards living or travel expenses for students wishing to undertake placements at the following institutions:

Corbridge Roman Site, Corbridge: http://www.english-heritage.org.uk/daysout/properties/corbridge-roman-town-hadrians-wall/
This placement will involve supporting the curatorial team in their collections research for the upcoming re-interpretation project at Corbridge museum. The exact nature of the work will depend on the applicant's interests and experience, and the stage of current work at the time of the placement.

The successful candidate will have the opportunity to complete three different tasks: 1) historical research on an aspect of Roman history, including life in a Roman town, the history of Roman military installations, and early-modern/modern literary responses to Roman sites; 2) the interpretation of historical material to the public, including preparation of display panels, trails and reconstruction drawings; 3) shadowing a historian at project meetings and helping to prepare project documents.

Note: these examples are indicative, and the exact nature of the placement programme will be determined by its timing, project requirements, and a discussion with the candidate.

This placement offers the opportunity to gain experience in Digital Classics research. The successful candidate will have the opportunity to design and implement a small, independent piece of work related to one of the Institute's projects, for example: a database of persons or names related to a historical source or area; annotating geographical information in visual or textual resources; or library catalogue data related to digital publication. Advanced digital skills are not a requirement, but familiarity with basic tools such as spreadsheets and database tables would be an advantage

All Undergraduate and MA students are eligible to apply for these bursaries, and may either make an open application, or specify the museum/organisation they wish to work at. The deadline for applications is 30th April 2017. Candidates should send a letter of application to Dr. Fiona Haarer (Roman Society Secretary), outlining why they wish to undertake the internship, and any relevant experience that they have. These should be sent to the e-mail office@romansociety.org, as should any queries about the bursary scheme. Dates of the placements can be set through consultation between the successful candidate and the organisation in question, but are usually for 2-3 weeks during the summer holiday.

Click here to read the reports of what previous students did on their museum internships.
Posted by Joint Library of the Hellenic and Roman Societies / Institute of Classical Studies Library at 15:32 No comments:


If you're interested in finding out about female authors in antiquity (or just want to be able to name one other than Sappho!) then this post from last August would be a good place to start.

If you'd prefer something a little more recent, then 'Women classical scholars : unsealing the fountain from the Renaissance to Jacqueline de Romilly' (edited by Rosie Wyles and Edith Hall) has just come off the New Books Shelf, so you could borrow it for a whole two months and read some of the fascinating stories about our scholarly foremothers.

To read an interview with Edith Hall about some of the trials overcome to get this book published, click here.

Alternatively, if you'd like something to add to your own bookcases at home, there should be plenty on our Sales Shelf to tempt you. A few choices specifically about women:

Welch, T.S (2015), Tarpeia: Workings of a Roman Myth
In this book Tara Welch considers how the myth of Tarpeia (who, in legend, betrayed Romulus' city to the Sabines) was used by ancient thinkers as a lens through which to consider matters such as ethics, gender, conquest, and, ultimately, what it meant to be Roman.

Euripides. Blessington, F. (trans.) (2015), Trojan Women, Helen, Hecuba: Three Plays about Women and the Trojan War
A verse translation by Francis Blessington (with introduction and notes) of these three plays about women affected by the Trojan War. 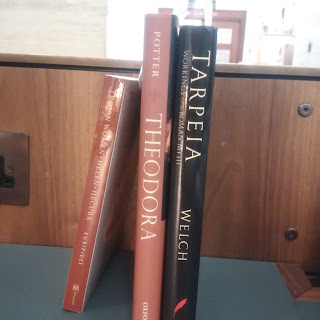 
Posted by Joint Library of the Hellenic and Roman Societies / Institute of Classical Studies Library at 12:11 No comments:

Dates for your Diary: Easter Closure

Thursday 23rd March will be our last day of evening opening, coinciding with the end of the university term. After that date the library will close at 6pm during the week, rather than 8pm.

Saturday 8th April will be the last Saturday that the library is open before Easter.

The library will close for the Easter holidays at 6pm on Wednesday 12th April. We will re-open on Wednesday 19th.
Posted by Joint Library of the Hellenic and Roman Societies / Institute of Classical Studies Library at 16:05 No comments:

The ICS/Joint Library team are delighted to announce that Joanna Ashe has been appointed as our new Librarian. She is currently a senior information specialist at the Royal College of Physicians, and will be joining our staff at the end of May. We look forward to working with her in keeping the library a hub for innovative and interdisciplinary research across the Classics.

We want to thank all three shortlisted candidates, who gave their presentations on 17th February. They provided much food for thought regarding the future of research libraries, and original ideas on how any challenges could be met. The library team very much enjoyed listening to these talks and appreciate the effort that went into them.
Posted by Joint Library of the Hellenic and Roman Societies / Institute of Classical Studies Library at 19:34 No comments: