At the end of each term we refresh the display of book jackets from hardback books
to show a selection of new books received.
The display is behind glass panels near the entrance to the archaeology / art room 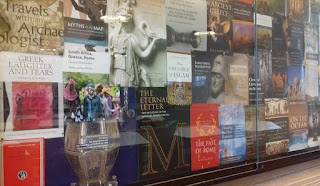 Posted by Joint Library of the Hellenic and Roman Societies / Institute of Classical Studies Library at 17:20 No comments:

On 12th March the Numismatics Room in the Library was renamed in honour of John Casey (1935-2016) who has remembered the library so generously in his will. The event was held in support of the Library Fundraising campaign and an audience of invited guests, including a number of John's friends and former colleagues. The unveiling ceremony was held after an amateur dramatic event "Queen Elizabeth and the Twelve Caesars" which retold the (true!) story of the offer of coins to Queen Elizabeth I in 1561. The play was written and directed by Andrew Burnett.

Posted by Joint Library of the Hellenic and Roman Societies / Institute of Classical Studies Library at 16:56 No comments:

Due to the inclement weather and possible transport difficulties it has been decided to close the Library at 7.00 pm this evening. Unfortunately network problems have not enabled an update to be placed on our webpage.
Posted by Joint Library of the Hellenic and Roman Societies / Institute of Classical Studies Library at 14:35 No comments: